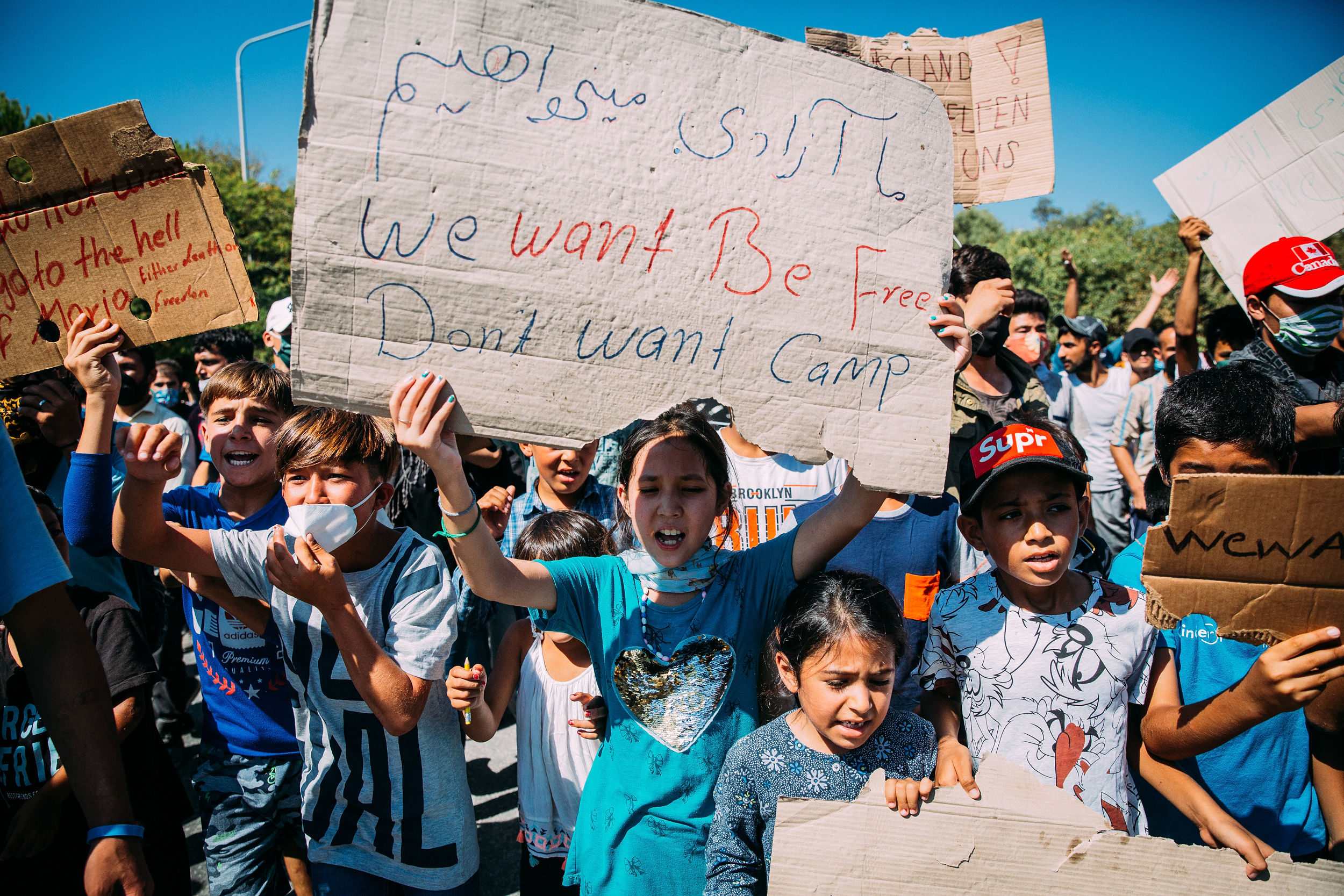 Migration and flight are probably as old as the history of mankind itself. After all, suffering, hunger and war have always been part of human history. In 2019, according to UNHCR (UN High Commissioner for Refugees), almost 80 million people were on the run. 40% of them were children and young people under the age of 18. About ¾ were in a neighbouring country to their home country. Only a small proportion of those, who are fleeing have the means and opportunity to risk the dangerous journey to Europe. Finally a minor part reaches their destination. Thousands of people have lost their lives in recent years trying to get to Europe via the Mediterranean Sea. Europe is not only standing idly by, allowing it to happen but also but also exacerbates the criminalization of civil sea rescue..

Once they have reached European borders, refugees are not fully safe: again and again so-called "pushbacks" occur at EU's external borders, where Greek coast guards are particularly often involved in the Aegean Sea. In doing so, their ships dangerously push the refugee boats away by creating waves or destroy the boats' engines and tow them into Turkish waters with a rope. "I heard the refugees screaming all the time. The Greek coast guard even fired into the water and towards their direction," a Greek resident told German news magazine Der Spiegel.

Dimitris Choulis also sees the European Border and Coast Guard Agency Frontex to be responsible for what happens at European borders day by day. He works as a lawyer on the Greek island of Samos, gathering evidence on pushbacks. "Frontex either knows everything or they are completely useless. I think they know everything, because to be that useless, to do your duties that bad - not seeming to realize and see what everyone here knows and sees on such a small island that would be even worse." In fact, research done by ARD and Spiegel was able to prove that Frontex was directly involved in at least one pushback case.

Articke 18, Right to asylum, CHARTER OF FUNDAMENTAL RIGHTS OF THE EUROPEAN UNION

Instead of rescuing people from distress at sea, ships flying the flag of EU member states are once again exposing refugees to the risk of death on high seas. The lives of refugees become object of a fateful situation of being unimportant to coast guards. Pushbacks are illegal. The actions of the coast guards and the Frontex agency must be stopped and sanctioned. They claim themselves to comply with applicable law and order.

But even if refugees manage to arrive in Europe, it does not mean the end of suffering and misery for so many. Inhumanly crammed into overcrowded camps like Moria (Lesbos, Greece), which was completely destroyed by fire in September 2020, tens of thousands of people have to wait for a better life - often for years. There, they live in precarious conditions in hovels, tents or, at best, containers. There are no roads or infrastructure. Garbage accumulates on the edges of dirt sidewalks. After Moria burned down, more than 12,000 people were homeless. About 7,800 were housed in the Kara Tepe emergency shelter. "There are critical gaps in drainage, water supply, sanitation, hygiene and health care", as UNHCR reported just before the winter of 2020.

Many refugees arrive in Greece because of its geographic location, which places a proportionally greater burden for the country and its inhabitants than it is the case in other EU member states. Although all EU members committed to the Geneva Convention on Refugees through Article 18 of their Charter of Fundamental Rights, Poland, the Czech Republic and Hungary have refused to accept refugees. There are no regulated redistribution policies. For fear of losing voters to right-wing populist parties, a solidarity-based refugee policy is unpopular among European governments.

All this sums up the behaviour of a supranational association of states that was awarded with Nobel Peace Prize in 2012. In our opinion, the EU's treatment of refugees and people in distress at sea has to be described as inhumane and insufficient. The deaths in the Mediterranean Sea must be stopped. The undignified conditions in refugee camps must be eliminated. The reception process must be radically accelerated in order to preserve human dignity and right to asylum for every human on flight. Europe is a rich community of states. We therefore demand safe havens and safe escape routes. We have necessary capacities to save people from death and to release them out of misery!

Where can I get more information?

In 1950, UNHCR was founded to help millions of people fleeing after World War II. The Geneva Refugee Convention was adopted in the following year, and the UN Refugee Agency sees itself as its "guardian." The protection of refugees worldwide is therefore at the heart of its work. UNHCR is active in 134 countries worldwide on behalf of asylum seekers, refugees, internally displaced persons, stateless persons and returnees.

Humans Right Watch is an international non-governmental organization that works to protect and defend human rights. They give a voice to victims of human rights abuse and put pressure on leaders and policymakers. Their researchers work in over 100 countries, including Syria and Myanmar, to expose human rights abuses. They advocate for changes in policy by meeting with governments, rebels, corporations, and the United Nations, among others. They share the stories they encounter daily with millions of people on social media and their website.

Space-Eye is a non-profit organization with the goal of documenting what is happening on the Mediterranean Sea and helping people on the flight. To do this, they work with satellite and drone imagery to track refugee boats and enable safer and more efficient rescues.
In November 2020, Seebrücke Passau, in cooperation with Space-Eye, collected donations for people in refugee camps. You can find more info about this action here..